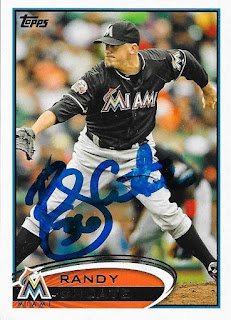 Here are a couple nice Topps Update cards that I was able to get signed TTM by Randy Choate.  The above 2012 Topps Update card looks nice, with the Marlins logo and color scheme.  I believe 2012 was the first year with this Marlins concept, and the colors look nice, I think.  The Marlins switched over from "Florida" to "Miami" for the 2012 season, and revamped their colors and logo.  I think their colors always pop on cards, but these are extra flashy/ 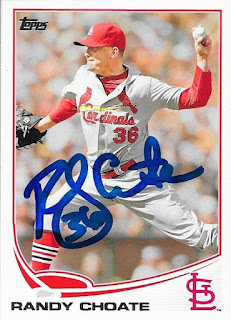 This 2013 Topps Update of Choate is more of a back-to-basics color scheme.  I've always said, red looks really good on a card, and this one has a lot of it.  The card is sharp, and looks nice signed.