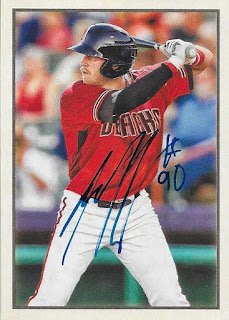 I was really happy to get cards back signed from Seth Beer.  I had gotten a few done when he was with Fayetteville last year, but I had a few other really nice ones that I wanted to send off.  I got a huge box of base cards from 2019 Bowman Heritage and really wanted to add a few to my album.  Thankfully, Beer signed one of them, and it really looks sharp. 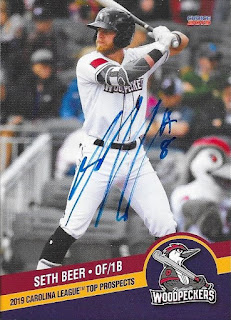 I also got one of my 2019 Carolina League Top Prospects cards signed, so that helps with that set.

Beer (b. 1996) was a first round (28th overall) draft pick by the Astros in the 2018 June Amateur Draft out of Clemson.  He was part of the trade that sent Zack Greinke to the Astros from the Diamondbacks in 2019.  So far, he has reached the AA level and has 209 hits, 38 home runs and a .294 batting average across 2 seasons in the minors.

Posted by William Regenthal at 5:05 PM