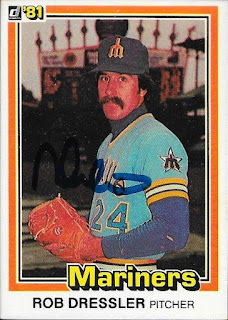 I like having different cards in my autograph album, and that includes some that may not be as catchy as others.  Still, some things can be found with some older sets that stand out.  1981 Donruss isn't the greatest set, but it isn't terrible.  It's a pretty basic design, and looks pretty nice when signed.  This Rob Dressler card is decent enough.  The background is a bit dark, but it looks like the photo was taken at old Comiskey Park.  I'm guessing those are the old pinwheel things on the scoreboard behind Dressler.

I mailed to Dressler on October 30 and got the cards back on November 9, for a 10-day TAT.

Posted by William Regenthal at 2:43 PM