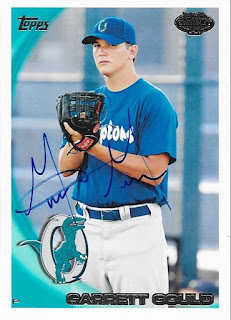 Over the last few months, I have been working on moving a bunch of prospect and former prospect cards out of my boxes.  One of the things I enjoy the most about blogging my TTM successes is how I can find out about some of these guys who were prospects a few years ago, but maybe didn't pan out.  I also have been able to get some nice-looking cards signed in the process, like the above 2010 Topps Pro Debut that I got signed by Garrett Gould.
The Ogden Raptors were a Minor League team that I had wanted to go see play for a long time now.  Since Rob Manfred jacked up the whole minors system, the Raptors will no longer be part of the MiLB system.  I believe they will be a collegiate-level team, but I haven't heard.  Regardless, the stadium in Ogden, Utah is beautiful.  I still want to go.  Anyway, this 2010 Topps Pro Debut of Gould is a really nice card.  I like the Raptors logo, and the colors on the card.  I'm glad it was one of the ones of Gould I was able to find and get signed TTM. 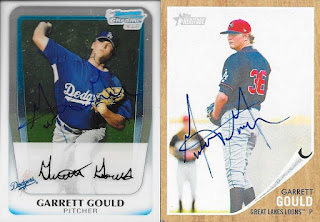 I mailed to Gould on September 1 and got the cards back on October 27, for a 56-day TAT.

Posted by William Regenthal at 12:02 PM