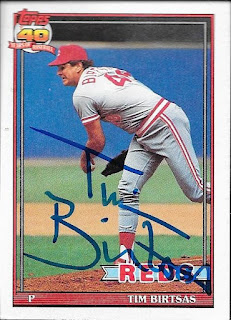 Here are a couple junk wax era cards that I was able to get signed TTM by Tim Birtsas.  The above 1991 Topps turned out pretty well; he has a fairly large signature.  1991 is one of the better Topps sets to come out of the junk wax era.  It has some surprisingly good photography, and I have enjoyed getting some of these cards signed. 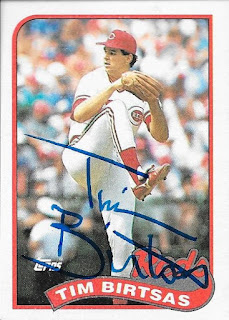 1989 Topps will always have a spot for me.  This set was among the first baseball cards that I ever got, so the design sticks with me.

I mailed to Birtsas on October 22 and got the cards back on November 5, for a 14-day TAT.

Posted by William Regenthal at 5:26 PM