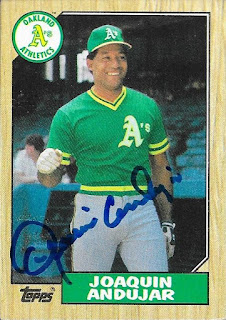 My good friend, Nate, hooked me up with a really tough auto for the 1987 Topps set, Joaquin Andujar.  The signature on the card looks great, and matches all of the Andujars that I have looked at while shopping for the set.

It was really awesome of Nate to pick this card up for my set.  It was actually fortuitous, because he messaged me asking me what I wanted for Christmas, and I got a notification that this card was posted a few minutes later, so I sent him a link.  Nate jumped on the card, and sent it to me once he got it.  Thanks so much, buddy!