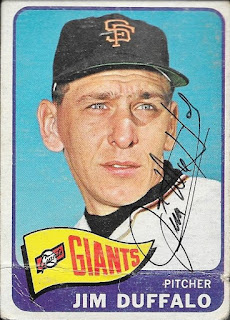 It took two tries, but I finally got this beat up old card signed by Jim Duffalo.  This is a pretty rough 1965 Topps, but it will still look cool in my album.  I've shifted my focus a bit, as of late, to early-to-mid 2000s Bowmans, just to get them out of my box.  I still enjoy getting vintage cards signed, and will probably shift back to some of those sometime soon.