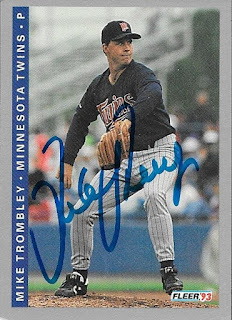 I dug deep into the super junk wax era and got a few cards out of my boxes and into my autograph album.  I have so many cards from 1992-1994, it's sad.  A lot of them just sit around in boxes taking up space, and it can be really hard to get rid of them sometimes.  So, when I see someone like Mike Trombley signing, I take advantage of it.  The best part, Trombley signs a lot of cards, so I was able to get 5 of them out of my boxes (and a lot more that I sent out to other friends in TTM starter packs.
I have a whole 5,000-count box of 1993 Fleer.  They're not bad cards, they just sit at the bottom of my closet, and I can't get into the box often enough.  The cards look nice when signed, so I think I need to make an extra effort to get more out into the mail. 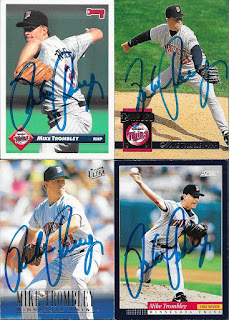 I mailed to Trombley on October 13 and got the cards back on October 22 for a 9-day TAT.

Posted by William Regenthal at 11:30 AM