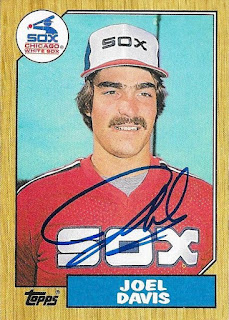 My buddy, Aidan, surprised me with an awesome Christmas gift that finally came in today, thanks to delays with the USPS.  Among the stack of awesome cards that Aidan Sent were two cards I needed for my 1987 set.  I knew about the above Joel Davis; I actually had sent this card to Aidan so he could enter it in a private signing.  He basically said "I'm going to do this signing for you, but I need to find the card..."  I had plenty, so I saved him from having to buy one.
Davis (b. 1965) played in the majors from 1985 to 1988 for the White Sox.  He had a record of 8-14 with 126 strike outs and a 4.91 ERA. 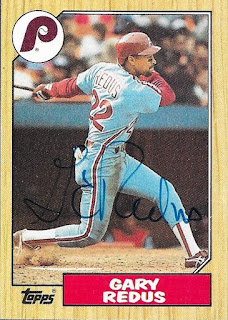 Aidan also included this Gary Redus that I needed for the set.

Aidan also included some Stranger Things cards, a couple Orioles cards, some random stuff and a couple autos.  Thank you so much for the gift, Aidan!