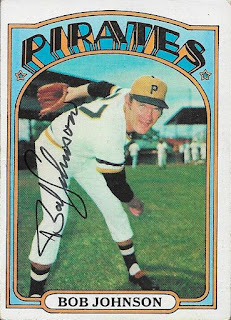 It seems like my successes for 1972 and 1973 Topps are paired most of the time.  That's because I got the partial sets at the same time, and there were about the same amount of cards in each partial set.  I also went through the boxes looking for TTM subjects at the same time, and pulled the same names.  Fun times.  Still, I'm happy to get any card signed, and when I can send more than one vintage card in, that's always a plus. 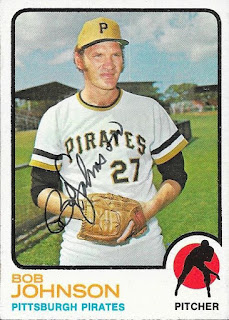 These were the only two cards of Bob Johnson that I had, so they got sent TTM to him.  He signed them and got them back to me fairly quickly, which is always nice.

I mailed to Johnson on October 8 and got the cards back on November 3, for a 26-day TAT.

Posted by William Regenthal at 12:23 PM