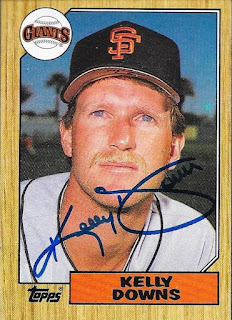 I had been waiting to get Kelly Downs for a while.  I thought he was signing TTM a while back, so I gathered a bunch of cards to send, and I realized that I had been mistaken (not the first time this has happened).  So, I took all of his stuff out of my to be TTMed box and waited for him to pop up in a private signing.  One finally did, so I got his 1987 Topps card out of the way.