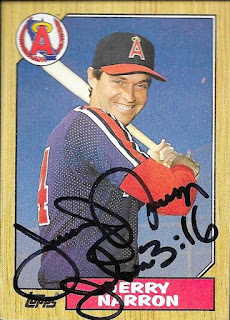 A fellow autograph collector who is also working on the 1987 Topps set put a bunch of his extras on Facebook for sale, and I grabbed a few to cross off of my checklist.  The ones I got were of some guys who seem to be fairly tough to get.
I was hoping I could get Jerry Narron from my friend, Gerard, since Narron was supposed to coach with the Red Sox this past season.  Since no fans were allowed at games, Gerard wasn't able to get my card signed.  So, I went ahead and got Narron this way; he won't be with the Red Sox in 2021.

I was going to try Randy O'Neal TTM, but went ahead and bought the card.  I have a TTM out to Pat Sheridan, and if it ever comes back, I'll have some trade bait.  I had hoped Alan Ashby would pop up on a private signing, but one hasn't, so he is now off of the list, as well.

I have 661 cards signed out of 792, or 83% complete with my set.  I've been working hard on it, and have a really awesome album to show for it.  I've got a few more cards out, but getting the autographs for the set is getting more difficult.  I still believe I can get this set done, but there are going to be a few folks who are near impossible.  We'll have to see how it goes.

Posted by William Regenthal at 12:31 AM

I am so looking forward to you completing this project and then showing off the completed pages!