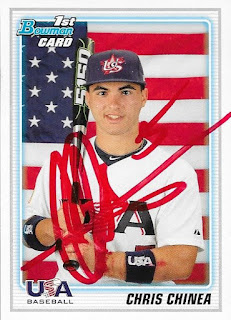 I have found a good place to locate addresses and have used it lately to get a bunch of older Bowman cards signed TTM.  I really started using it when I was searching for some of the guys in the 2010 Bowman USA set.  I've been able to get quite a few cards from the set signed.  There are some that I will probably have to wait to get, like Alex Bregman, but I've done pretty well overall.

I got this card signed by Chris Chinea in a red Sharpie, which actually fits the card.  I know red isn't usually good for autos; it'll probably fade after a while, but it looks cool today.

Posted by William Regenthal at 10:25 PM