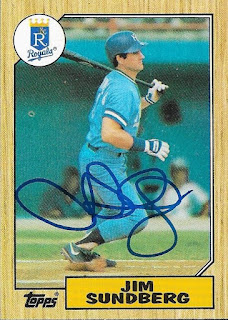 I had sent t Jim Sundberg back in 2016 or so, but never got a return, so when I saw a private signing come up for him, I went ahead and spent the money to get my 1987 Topps signed.  The card is now done, and if my TTM ever comes back, I'll have an extra one I can trade.

Posted by William Regenthal at 11:53 PM