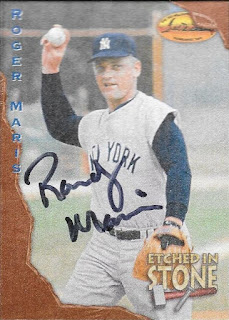 I don't mind getting a baseball legend's card signed by a relative, if the legend himself has passed.  In this case, I got a couple Roger Maris cards signed by his son Randy. 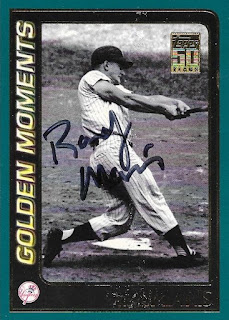 Maris appeared on the Hall of Fame ballot for the maximum of 15 times (1974 to 1988), but never got more than 43.1% of the vote (and that was in his final year of eligibility).  Arguments can be made for and against Maris's Hall credentials; I'm not sure his two good seasons and one epic season among his 12 in the league qualifies him, but if he did get in at some point, I wouldn't be upset.

I mailed to Randy Maris on October 28 and got the cards back on November 9, for a 12-day TAT.

Posted by William Regenthal at 11:15 PM

Maris is in my PC.