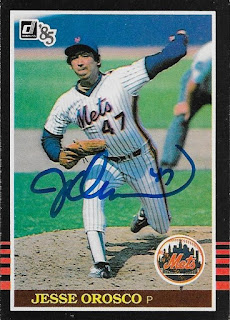 I saw that Jesse Orosco was signing TTM, so I quickly got a few cards together and sent them out.  I had already gotten him for my 1987 Topps set, thanks to my friend, Gerard.  So, I went with the first few that I found.
I don't have many 1985 Donruss to begin with, and even fewer in my autograph album, so it was an easy decision to send this one. 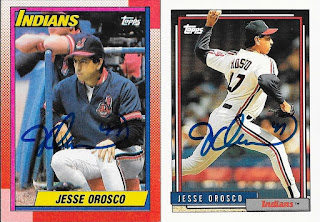 The Topps box at the top of my stack of boxes at the time I was looking for Orosco stuff was my box with 1990-1992, so these two were the ones I sent.  Both of them turned out great, as well.

Posted by William Regenthal at 9:43 AM