I crossed another name off of my 1987 Topps checklist with this TTM success from Willie Wilson.  I also got the above 1985 Topps signed.  I figured I would add something to the submission along with the typical 87, so this card made the cut. 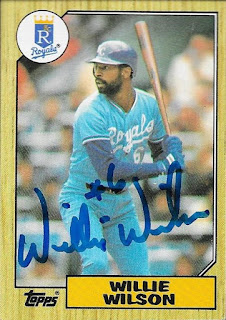 Of course, the 87 looks great, also.  I was glad to get this card done and off of my list.