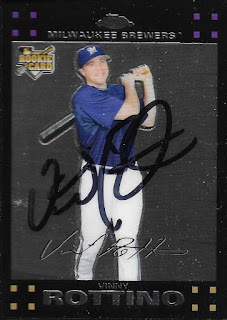 Here are a couple mid-2000s cards that I got back signed from Vinny Rottino.  I recently took in a bunch of 2007 Topps Chrome and this was in that lot.  I have always liked the 2007 design, and he Chrome looks great, as well; especially the different color refractors. 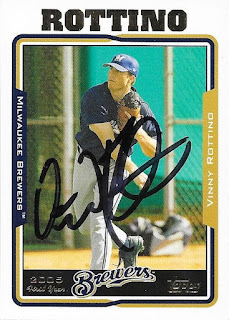 I also got this 2005 Topps Update signed by Rottino.  It also turned out well.  I had busted a box of there back in 2005 and have been slowly sending some off for signatures here and there.

I mailed to Rottino on October 6 and got the cards back on November 9, for a 34-day TAT.

Posted by William Regenthal at 10:32 PM