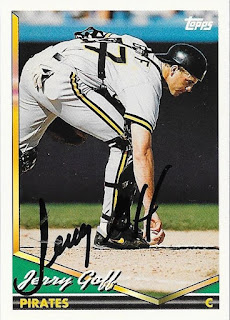 I got another 1994 Topps out of my box with this TTM success from Jerry Goff.  1994 is among the series of Topps cards that I may have the least of (aside from vintage Topps, of course).  I used to have a ton of it, but gave away boxes and boxes of common base cards several years ago as I was cleaning out some before I moved.  I kind of regret letting a lot of that stuff go, but in the end, I wouldn't have wanted to move it all, anyway.