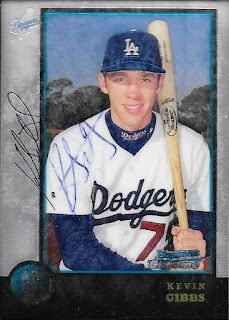 This card did not age well.  This is one of the late 90s Bowmans (1998 Bowman Chrome) that I got from my LCS.  The UV coating on it didn't age well, at all, and of course got worse when I prepped the card.  I've sent some of these off recently without any kind of prep; let's see if they come back looking better than this poor thing did.