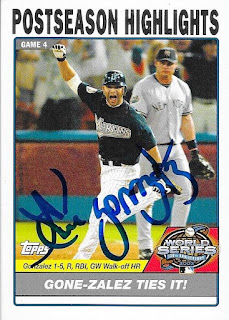 I had cards of both Alex Gonzalez guys in my box for a long time that I had put aside for TTMs.  I had thought that I had seen that each was signing, but I guess I missed the window.  So, when I saw that the Marlins Gonzalez (and not the Blue Jay) was signing through a private signing, I went ahead and got two cards done and out of my box.  **Whoops, I wrote this entire post and realized that I DID get this Alex Gonzalez TTM.  I think he stopped after I got him.  Anyway, I got these two cards via a private signing.  Oops. 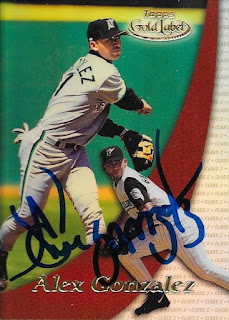 I thought I picked some nice cards.  The 2004 Topps at the top of the post turned out great, as did the above 2000 Topps Gold Label.  Man, that thing scanned sharp!