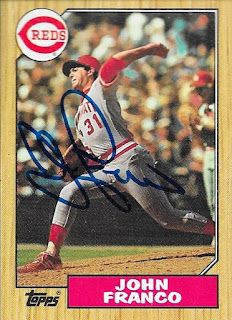 Another tougher name was crossed off of my 1987 Topps checklist thanks to a private signing on SCN, John Franco.  The card turned out great, as is usually the case with private signings.

I mailed to the signing on September 14 and got the card back on November 9, for a 56-day TAT.

Posted by William Regenthal at 7:39 PM