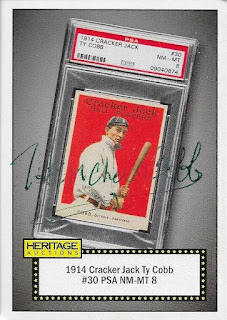 Some folks that I've talked to don't really care for getting autographs of descendants of former MLB greats.  I actually like reaching out to some and getting some cards signed.  This was the case of my TTM success from Herschel Cobb, grandson of Hall of Famer, Ty Cobb.  I was happy to get these three cards signed, but I was equally as happy to get the above card from the 2017 National signed by someone.
This Heritage Auctions card was part of the VIP pack from that National.  It is an oversized card, much like the size of the pre-1957 Topps offerings.  Cobb signed the card using Ty's fountain pen and green ink.  The ink bubbled a bit, but I don't care.  The card still looks cool. 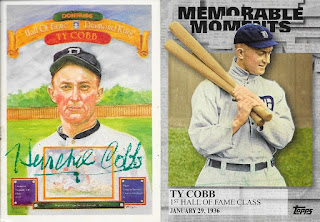 I also got these two cards signed by Cobb.  The card on the right, a 2017 Topps Memorable Moments insert didn't really accept the ink at al.  You can see the faint remnants of the signature on the card.  It probably wasn't allowed to dry fully before it was put back in the return envelope.
The card on the left is a 1982 Donruss Diamond Kings and turned out to be the best of the bunch.  It is a nice card anyway, but looks really cool now that it has a signature on it.

Herschel Cobb is now 77 years old and wrote a book - Heart of a Tiger - Growing Up With Ty Cobb, which I need to pick up.

Cobb was always known as a fierce competitor, and had his troubles on and off the field.  The book, Ty Cobb - A Terrible Beauty does a really good job debunking a lot of the urban legends regarding what we thought we knew about Cobb as a person.  The author of this book goes a long way in discrediting the well-known biography of Cobb by Al Stumpf.  Apparently, Stumpf fictionalized a lot of the accounts in his book to make a name for himself.

I mailed to Herschel Cobb on October 16 and got the cards back on October 28, for a 12-day TAT.  Cobb included a signed note and also an index card with Ty's signature stamp that Ty used in his lifetime.