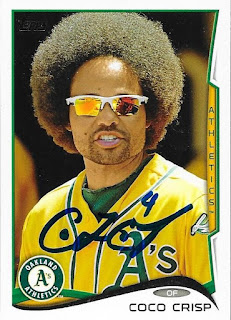 This might be one of the best cards that I've gotten signed in quite some time.  I saw that there was a private signing for Coco Crisp being promoted on Facebook through the Trove Sports Den, and I had to sign up.  I, then, had to dig through my boxes, praying I had an extra 2014 Topps Coco Crisp, which I did.  I actually had 2 or 3.  So, I sent this one off, so it could be added to my autograph album.  The card looks awesome!

Posted by William Regenthal at 10:51 AM

Sweet Coco. Well worth the $7 fee.

You could not have picked a better card to send! Always loved that one.

Sweet TTM! I'm wondering of this card he had to sign. If you're getting Coco, that's the card to sign.