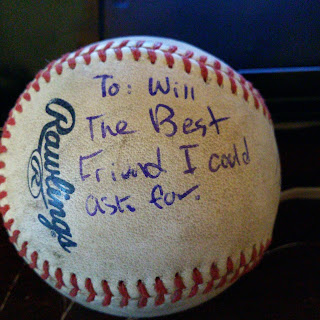 My buddy Max sent me a box that I got today.  Inside was a lot of stuff that I really loved, but it was a simple gesture from him that really blew me away.  He sent me a game used ball that he picked up at some point, but this ball he signed himself, and inscribed it with the above inscription.  I have a ball signed by another friend, Michael (actually, he has sent me several) and I have also received a ball "signed" by my nephew.  Collecting autographs of famous baseball players is fun and all, but when something as small as a signed ball from a friend or family member comes in, I really enjoy getting them.  Max is such a great guy, and I am so lucky to be able to call him a friend.  I was able to meet him at The National last summer, and had a blast.  He and his family were such amazing hosts, and made us feel really welcome. 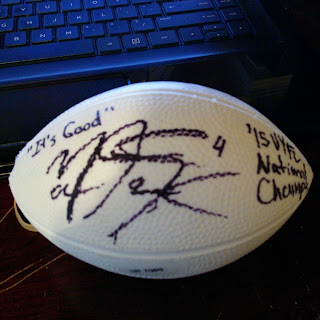 Not only did he include the signed baseball, but Max also sent me this signed mini football.  Max is a gifted baseball player, but he is also a very talented football player.  He was the kicker, center and defensive end on his youth team which won a National Championship this past season.  He and his dad skyped me from their hotel room during the tournament, which was really cool.  I wish I could have gotten down to Florida during his games and saw him play. 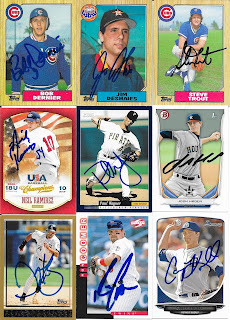 Max and I have a pretty good system worked out.  I send him cards that he needs for conventions and games, and in return, he sends a couple of them back to me after he has gotten them signed.  The assortment of cards above all came from some of the many huge boxes of cards that I have.  I have always had a ton of 1987 Topps, so using those for something other than kindling.  The more current cards, the two Bowman and the Team USA came from some cards I had lying around and the rest came out of some really cool mid-90s boxes that my mom hooked me up with.  I was especially pleased with how the 1994 Score Paul Wagner came out. 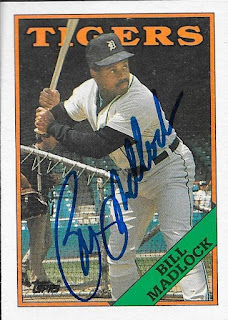 Because I couldn't fit the tenth card onto the scanner, this 1988 Topps Bill Madlock gets its own scan.  It actually turned out pretty great.  I am really growing to love the late 80s designs.  They look really awesome signed, so I intend to add some more to the binder as I get more and more TTMs in. 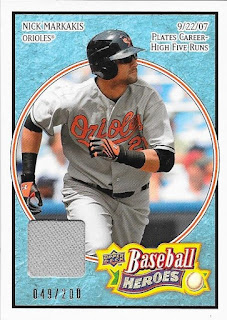 Max also included some cool cards for my collection, which were the second half of his Christmas present to me.  This Nick Markakis Baseball Heroes relic is really nice.  I think this is an underrated set. 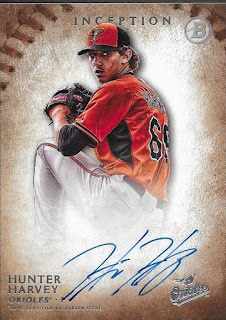 This Inception auto of Hunter Harvey is also really cool.  I like the design of Inception, and was happy to add this to the collection. 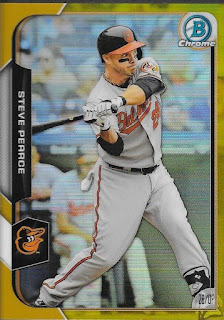 Finally, Max included this 2015 Bowman Chrome gold parallel of Steve Pearce that is numbered 13/50.  I liked Pearce when he was an Oriole, but he is with the Rays, now.  He always has done well when playing at Tropicana Field, so we will see how that translates in playing half of his games there.

Thank you so much for the awesome package, Max!  I really appreciate it, and it made my day!
Posted by William Regenthal at 7:08 PM