The second TTM success that I got yesterday was from former Oriole, Bob Bailor.  This one I was really excited about, not because he had been an Oriole, but because I was able to make use of a 1975 SSPC card that was part of the huge batch of old stuff that Max had sent me.  I felt like the SSPC card would look pretty cool signed, and I was right! 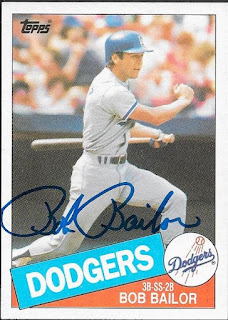 Bailor also signed this 1985 Topps card that I found in a box of cards that my mom had given me.  She hooked me up twice recently with several huge boxes of early to mid 1980s cards.  My new repurposing effort has really been fueled by the cards in those boxes she gave me, and has given me a new joy in searching those boxes. 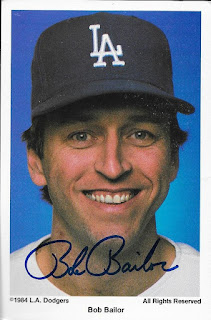 Bailor was nice enough to include this signed post card, along with the two that I had sent.  It turned out really nice, as well! 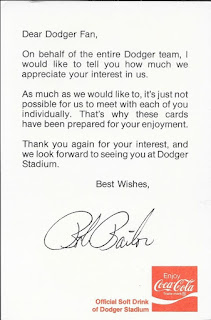 The funny thing was that this is the side of the card I had seen when I originally opened my mail.  It wasn't until my wife took it from me to see if this signature on the back was real when I saw the auto on the front.  I guess I was so excited to get something extra, it didn't occur to me to turn it over.

Bailor (b. 1951) played in the majors from 1975 to 1985 for the Orioles, Blue Jays, Mets and Dodgers.  He had 775 career hits, 9 home runs and a .264 batting average.  I say he was a former Oriole, but his time there was less than a cup of coffee, amassing a total of 14 games split between the 1974 and 1975 seasons.  It is interesting to note that Bailor was drafted by the Blue Jays from the Orioles with the second pick in the 1976 Expansion Draft.  The first pick of the draft was Ruppert Jones by the Seattle Mariners.

I mailed Mr. Bailor on February 22 and got the autos back on February 29, making it a 7-day TAT.
Posted by William Regenthal at 5:55 PM