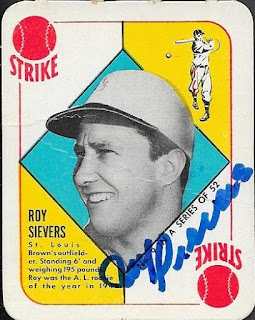 I got a TTM success this past Thursday (March 24) from Roy Sievers that really helped out my Topps Autograph Project.  I got a 1951 and a 1952 Topps signed by Sievers, and those were my first from both of those years.  The 51 is a Red Back; I have two Blue Backs mailed out, that I hope to see come back soon. 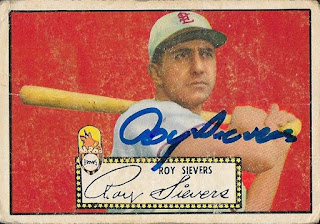 I'm really happy about this 1952.  I have since received another signed 52, and have mailed out several more.  I didn't realize how much I really loved this set.  Unfortunately, barring a lottery win, I doubt I will be able to complete this set in my lifetime.  Mantle 52, you know.  Ouch.

I picked up both of these cards on Ebay and mailed the out on March 15.  I got them back with a 9-day TAT.