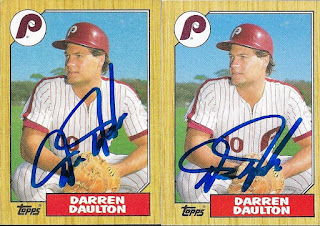 I got two TTM successes on Friday (March 4).  The first of which was this pair of signed 1987 Topps from former catcher, Darren Daulton.  I sent four cards (3 1987 and one 1989) and he signed the above two, and returned the others unsigned.  I mailed them out on February 18, in my first batch of TTMs that I have sent recently, so that made him a 15-day TAT.