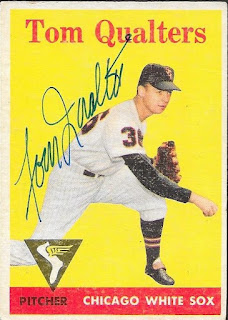 I sent out the first batch of vintage cards on March 11, and I am now starting to see some of the cards trickle in.  This card was actually the first of that batch to come in, even thought I jumped ahead and posted the Mike Sandlock that came in a couple days later.  I had gone through my box of 50s and 60s stuff and thought it would be cool to see some of those signed.  None of the guys were stars, so I figured it would be easy to replace the cards when the time came to do the sets.

I'm glad I did this.  Everything that has come back so far (and there have been a bunch from this batch) has come back looking awesome.  I like how Qualters signed this along the line of his back.  The thin blue pen he used also made his auto really stand out.

Qualters (b. 1935) played in the majors in 1953, 1957 and 1958 for the Phillies and White Sox.  He had a record of 0-0 after pitching in only 34 games in his career.  His career ERA was 5.64 with 20 strike outs.  According to his Wikipedia page, Qualters was signed by the Phillies out of high school as a "bonus baby" for $40,000.00.  This means that since he was signed to such a large bonus, he had to remain on the Phillies roster, even at the young age of 18, with no professional baseball experience.  Some other notable bonus babies are Brooks Robinson, Al Kaline and Sandy Koufax.  Qualters also has the distinction of being the only pitcher to appear on four different Topps baseball cards without ever recording a single win or loss.