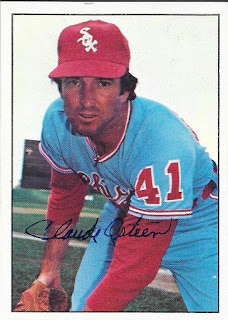 I got two TTM successes in on Monday (3/7).  One of them was former pitcher Claude Osteen.  The cards I sent (I sent three) were all in the batch from Max.  Osteen was actually one of the first I considered doing when I set out on sending some of these old cards TTM.  The above 1975 SSPC looks really cool signed.  As you can see, he signed it really small with a thin blue ink pen. 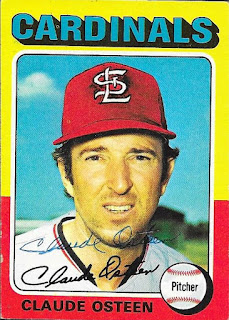 This card looks really cool.  I sent two of them, and both got signed.  The extra will go to Max, since he hooked me up with the cards, and really, the idea to do all of this.

There is more I want to say about this card though, and all the more reason to enjoy this project because I wouldn't have noticed it otherwise.  Take a look at that awesome airbrush job on that hat!!  Man, Topps wasn't messing around there.  I have come to appreciate the crazy airbrushing that they have done over the years.  This might be one of the best examples.  Also, the colors on this card really stand out.  I'm glad I chose this to send to him, because it will definitely look good in my auto album.

I mailed to Osteen on February 18 and got all three cards back on March 7 for an 18-day TAT.
Posted by William Regenthal at 9:54 PM