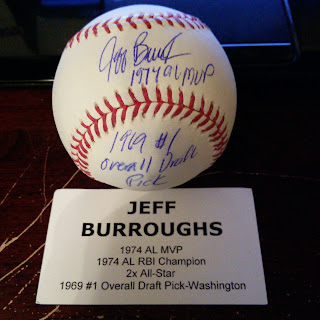 I "met" a guy on Instagram recently who is also from NC.  He messaged me while I was at the last card show in Raleigh, and we were supposed to meet up there, but he wasn't able to come.  That didn't matter, though, we kept on chatting on Instagram, then that spilled onto Facebook.  Drew (that's his name, another Drew) turns out to be quite the gifted baseball player and he also has a pretty awesome collection.

Drew messaged me the other day and offered me this Jeff Burroughs signed baseball for a really awesome price.  It is hard to tell, but the 1969 inscription is faded a bit.  I was ok with it, and made the purchase.  Drew shipped it out really quickly and it came yesterday.

Thank you so much for the deal, Drew!  I really appreciate it, and I look forward to many more!
Posted by William Regenthal at 10:13 PM