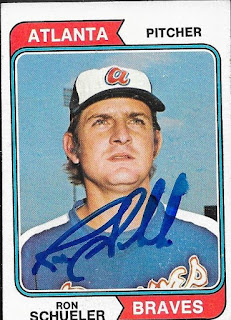 I got a TTM success back from former pitcher, Ron Schueler on Wednesday, March 23.  I only had one card of him, this 1974 Topps that came from the old Topps "Cards Your Mom Threw Out" promotion.  I had kept the cards that I had shipped from there in a box, still in the top loaders that Topps had provided.  Finally, I put a couple of them to use!  I really loved that promotion, and I wish Topps would run something like that again instead of some of the dumb ones they did after that (the virtual coins?  Blehh).

I received this signed card from Schueler 11 days after I mailed it on March 12.  This was the first 1974 Topps that I have gotten signed for my Topps Autograph Project.
Posted by William Regenthal at 6:21 PM