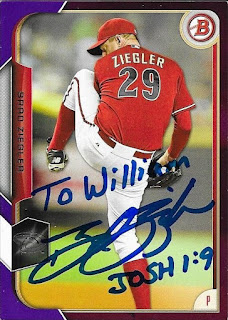 I got another TTM back from Spring Training on Friday when I got this really cool return from Diamondbacks pitcher, Brad Ziegler.  I had some nice parallels of him that I wanted to try, so I went ahead and sent them.  Ziegler pretty much signed 100%, so I figured sending these parallels would be ok.  The above purple parallel from 2015 Bowman turned out great.  It is numbered 72/250.  I really like the personalization and inscription.  The blue sharpie really looks nice. 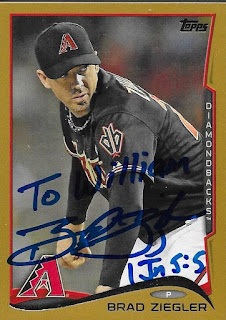 This gold parallel from 2014 Topps turned out nice also.  I'm glad I took the chance and sent them on.

Ziegler (b. 1979) has played in the majors from 2008 to 2015 for the A's and Diamondbacks.  He has a career record of 30-21 with a 2.47 career ERA.  He has been one of the better relievers in the game today.  He also saved 30 games for the Diamondbacks last season after transitioning to be their closer.

Ziegler is one of the more prolific TTM signers that currently plays in the MLB.  I sent to him at Spring Training on February 22 and git the cards back signed on Friday (3/11).  This was a 18-day TAT.
Posted by William Regenthal at 9:50 PM