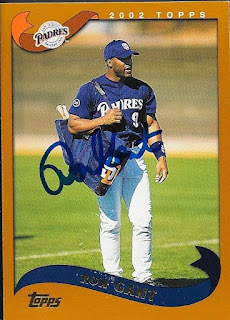 I got a huge TTM success on March 17 (Thursday) with my fourth success of that day, 7 signed cards from former big leaguer, Ron Gant.  I was able to add my first signed 2002 Topps for my Topps auto project.  I had a bunch of cards left over in a box from '02 when I built the set a few years ago, so finding this card was pretty easy.  I am in need of bulk cards from the late 90s-early 2000s to make this project work, but overall, I think I am doing pretty well in finding the stuff that I need, so far. 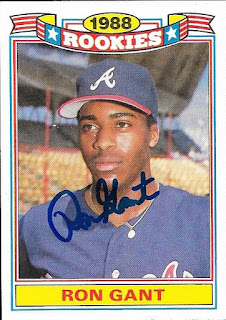 This 1989 Topps Rookies Gant was in one of the boxes that Mom gave me.  It is kind of funny to see this card beside the 2002 from the tail end of his career.  It would be kind of cool to get a couple TTMs from bookend cards, you know, a rookie next to a final year card.  I have a lot on my plate at the moment with the Topps auto project, but I think a few side TTM projects would be fun. 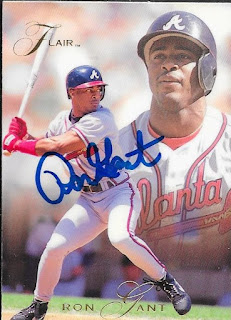 This 1993 Flair was also in one of the boxes that Mom gave me.  Actually, it was in the first of the two batches that she hooked me up with.  For a long time, I had been sorting those Flair cards, in hopes of finding a few guys that Max could get signed for me.  I only found one Chris Bosio, and Max kept that one for himself, and rightfully so!  These cards look so awesome signed.  I need to send off some more of the ones I have.  Flair was always a great product, and I enjoyed them, especially when they ventured into comic cards. 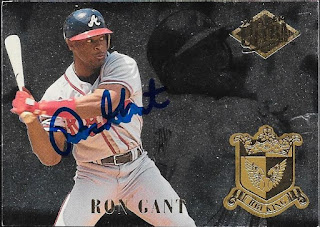 A couple weeks ago, I spent about an hour at my local card shop looking through a huge box of inserts and parallels from the mid-to-late 90s that have been sitting under a shelf for a long time.  I found a bunch of guys that I could send TTM to (this was before I decided on the Topps project).  I wanted to find a bunch of cool inserts to get signed, and I think I did pretty well.  This 1994 FLeer Ultra RBI King card turned out pretty awesome! 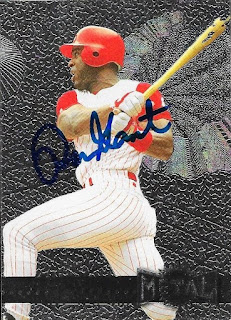 Since I started my TTM craze, I wanted to get one or more Fleer Metal cards signed.  I figured they would look cool, and I was right.  This 1996 Fleer Metal might be the best looking out of the bunch of cards I got from Gant. 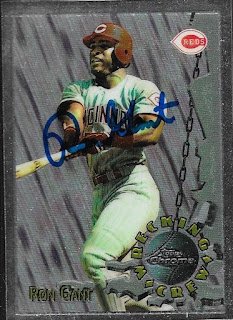 This 1995 Topps Chrome turned out really nice, as well,  I wasn't sure if the auto would stay, but it turned out great.  I'm glad I sent this card along. 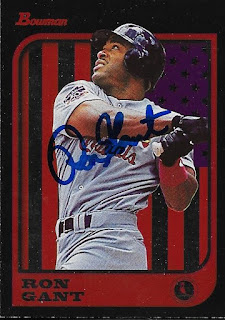 Finally, here is a 1997 Bowman Chrome.  I guess it is a chrome, it is more foil than chrome.  The card itself is really cool, and turned out even better when signed.  I like the American flag in the background as well.