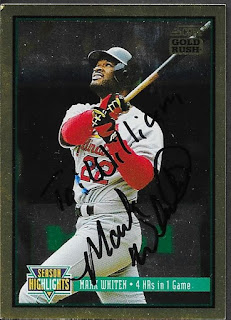 I had an awesome mailday yesterday when I received 4 TTM success in my mailbox.  I figured I would have a few massive maildays here and there with all of the TTM requests that I have mailed out recently.  I hope you all aren't tired of the TTM posts, because I have really enjoyed sending out my requests and seeing the successes roll in.

The first success I will show off from yesterday was Mark Whiten.  I only sent him one card, since I saw that he signed one-per.  I had a lot of his stuff to choose from, so I went with this 1994 Score Gold Rush that I found in a cigar box full of 1990s cards that my mom gave me for Christmas a few years ago.  Essentially, it was her collection that she had given me, since she had stored the cards she pulled in some of the old tin cigar boxes that she rescued from my dad's race shop.  The cigar boxes had belonged to my great-grandfather, so getting a couple of those were gifts unto themselves.

The Gold Rush card looks really nice, signed.  The scan didn't pick the signature up too well,  but Whiten inscribed it to me.  I mailed to him on 3/5 and got the card back yesterday (3/17) for a 12-day TAT.