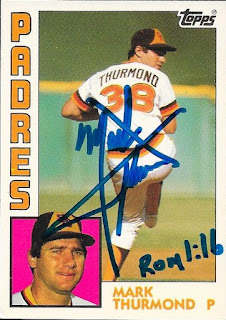 I got a bunch of TTMs on Monday, March 21.  I think it was 5 that day, but it was a ton.  I'll start with a guy who signs one-per, and that is Mark Thurmond.  I mailed this 1984 Topps Tiffany to Thurmond on March 12, and got it back signed with a bible verse inscription on March 21.  It took 9 days to get it back, which is a pretty nice turnaround.

His signature looks really cool, too, almost like a star.  I had a ton of Thurmond cards, and it was tough to choose which to send, especially since I had a couple of him as an Oriole, but in the end, the '84 Tiffany won out.  I figured, since it was unique to my collection, I should hold onto it in the auto album, instead of relegate it to a dime or nickel box.  I think it turned out great.

I believe this is his rookie card, if I am not mistaken, so that makes it an even better choice for TTM.  Since it is a parallel, I don't count it toward my Topps Autograph Project.
Posted by William Regenthal at 11:55 PM