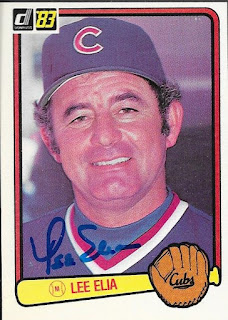 He managed the Cubs in 1982 and 1983, a stint maybe most memorable for a April 29, 1983 tirade that included a lot of F bombs that was recorded by Chicago beat writers.  I thought about posting a Youtube link, but I don't think it is for the faint of heart, or ear, but if you type in Lee Elia Rant, you'll end up in the right place.  He also managed the Phillies in 1987 and 1988.

Elia was also a bench coach for the Orioles in 2008 under manager Dave Trembley.

I only had the two Donruss cards of Elia, but I got both of them back in a 21-day TAT.
Posted by William Regenthal at 9:14 PM