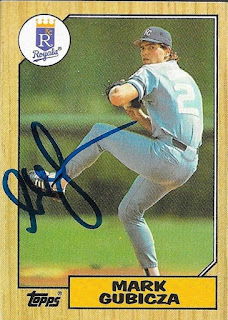 I got a second TTM success on Saturday (3/5) when I got a bunch of cards in from former pitcher, Mark Gubicza.  My good friend, Max, told me that I should send quite a bit to Gubicza, since he is known to sign anything and everything that is sent to him.  I didn't want to seem too greedy, but I did see a bunch of his cards that I thought would look cool signed.

Obviously, I had to send him one of my 1987 Topps cards.  I have so many of them, I needed to be able to put one or more of them to some kind of use.  It turned out great.  I am not seeking to get the entire set signed, but 1987 has been my default card of choice for many of the TTMs I have sent out recently. 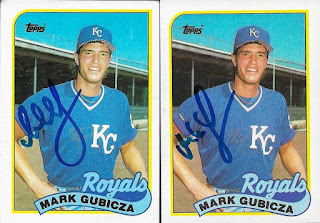 These two 1989 Topps turned out really nice in blue sharpie.  I'll probably gift one of these to someone, but I'm not quite sure who, just yet.  I do enjoy the 1989 set quite a bit, since it was the set my first baseball cards came from. 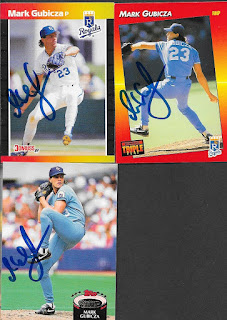 Finally, here are the other three cards I got.  It is always nice finding some use for a 1992 Donruss Triple Play card.  I feel like I had those coming out of my ears at some point.  I think it was because the boxes were so cheap way back when, we ended up busting a ton of them.  The 1992 Stadium Club turned out great as well.  One card I didn't scan was a signed 1996 Fleer.  It turned out really nice, as well.  Much like the Charles Johnson, the matte finish really makes an auto look good on those cards.