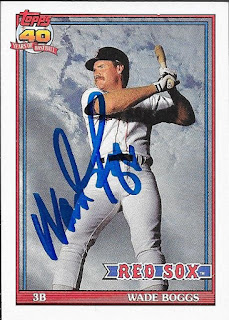 This was one of the more exciting TTMs that I have received so far in my endeavor to send out cards instead of baseballs.  I learned that Hall of Famer Wade Boggs would sign pretty much whatever you sent, if you paid a small fee, I had to give it a shot.  He was actually in the first big batch of cards I sent out on February 18, and on Thursday (March 10), I got the cards that I sent him back, all signed.

The above 1991 Topps was the one that I really wanted to see again.  I love the clouds in the background.  I think this may be one of the most beautiful cards that Topps has produced.  I believe that the 1991 set was one of Topps's best efforts as far as photography is concerned.  They have continued to improve, but I really feel like 1991 was a very eye-appealing set, that might be a bit underrated as far as collectors are concerned. 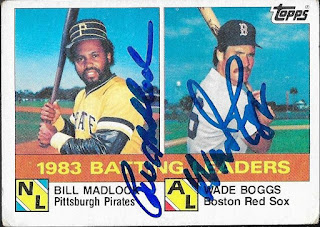 Initially, I was only going to send the 1991 Topps in for a signature, but I figured that since I was paying a fee, I should try to maximize my efforts.  Then, I remembered that my good friend, Max, gave me this 1984 Topps '83 Batting Leaders card that he got signed IP by Bill Madlock.  I knew I had a pretty good chance of getting Boggs on the other half, so I figured I should go ahead and send it in.  The gamble paid off and I now have this card signed by both guys featured on it. 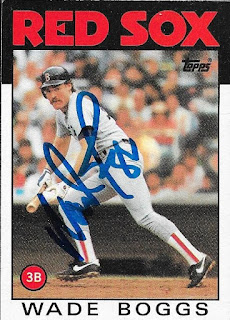 To round out what I was sending in to Boggs, I searched the huge boxes of cards that my mom had given me recently and pulled out a bunch of Boggs's cards.  I whittled down the selections to three additional cards.  One of the boxes she got me had a bunch of 1986 Topps inside.  I had recently thought of picking up a wax box of them so I could start looking for cards out of it to send to Max for autos, and even consider doing some TTMs.  Fast forward a few weeks, and I am on a serious roll with the TTM submissions; I love the boxes she gave me.  They have really come in handy for this little project.  I think it is funny that had she called me about the boxes a year ago, I probably would have told her that I wasn't all that interested in a bunch of Topps cards from the 80s and 90s.  Now, I can't wait to see what else she is able to find. 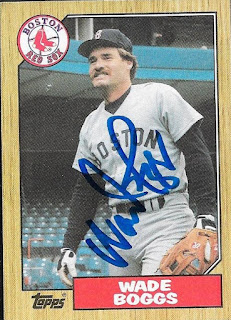 I've enjoyed this aspect of collecting so much lately, that I have been formulating a project that will tie into the TTMs that I have sent and am planning to send.  I love how all of these different cards look when they come back signed.  I think I have added more signed 1987 Topps than any other set so far.  I haven't really counted, though.  I probably will soon. 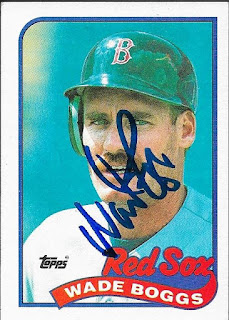 Another set that seems to always look good signed is the 1989 Topps set.  This Boggs turned out really nice, even though I guess him signing across his face does look kind of strange.  I still believe the 1989 set might be one of the best overall designs that Topps has offered.  Yeah, ok, the set itself might be worthless, but I think I am gaining a whole new perspective on an actual value of a set that extends far beyond money.

I hope you all are enjoying the recent flood of TTMs.  I am seriously loving it and my friend, Drew was right when he said it was addictive.  I have a ton of cards pending, and a few more queued up to be sent.  I also have a few successes still sitting here, waiting to be blogged.

Boggs never won an MVP award, having finished as high as 4th in the AL MVP voting (1985) and had to leave the Red Sox as a free agent to win his only World Series Championship, which he won with the Yankees in 1996.