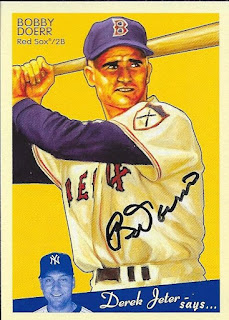 While I was looking for cards to send out for TTM, I found some more of one of the best all-time TTM signers, Bobby Doerr.  Doerr, at 97 years old (he will be 98 on April 7), is the oldest living Hall of Famer and the last surviving player to have played in the 1930s.  I mailed this 2008 UD Goudey to him on March 4 and got the card back on March 24, for a 20-day TAT.

Doerr was elected to the Hall of Fame in 1986 by the Veterans Committee.  I probably won't send to Doerr any more, since I have gotten him a few times now.  However, if any of you are even considering sending TTM to get autographs, I highly recommend trying Doerr.  He was the first ever TTM success I got, thanks to a suggestion from my buddy, Drew.  You can read about it, here.
Posted by William Regenthal at 10:27 PM