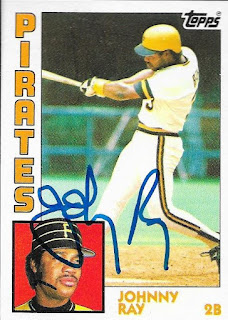 I got a bunch of TTM successes on Thursday, March 17, and even more over the weekend, so I need to play catch up, somewhat.  Thursday, I got 5 cards back from former big leaguer, Johnny Ray.  I mailed to him on March 5 and got the cards back 12 days later.

I was really excited to get these cards back, because I loved the old Pirates uniforms shown on the cards.  This 1984 Topps turned out great, I think. 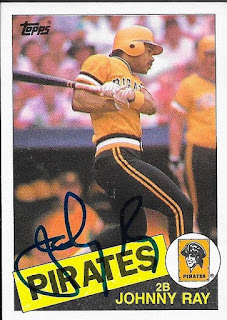 This 1985 Topps might look the best, though.  I love the yellow and black uniform that Ray is wearing.  Top is off with the color coordinated 1985 Topps showing the old school Pirates logo, and it really came out nice. 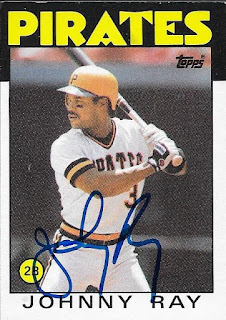 This 1986 Topps turned out nice, as well, I think.  This has always been an underrated design, and since I have a bunch of them now, thanks to Mom, I plan on adding to the TTM successes with them. 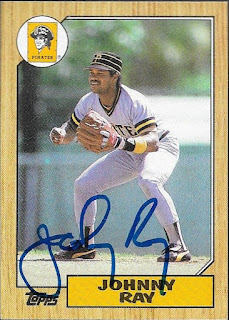 I was going to cut myself off with three cards to send out to Ray, but I couldn't send to him and not include a 1987 Topps.  I officially have more of these cards than any other year, so it isn't a surprise that I have the most TTM successes on this design.  Speaking of Topps designs and TTM successes, stay tuned for my next post, where I will announce the project that I have begun working on.  I'm really excited about it! 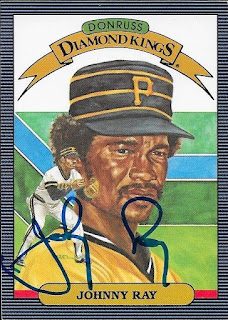 Finally, I had to include this 1986 Donruss Diamond Kings Johnny Ray, as well.  The prominent featuring of the old school Pirates hat is what did it for me with this card.  I couldn't not include it.  It turned out awesome signed, and I'm glad Ray signed everything I sent to him.