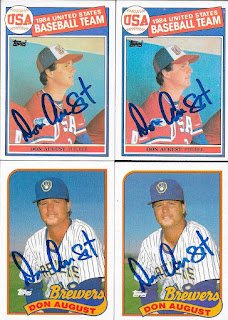 During one of my many Skype sessions with my buddy, Max, he helped me with a list of guys who were currently doing TTMs.  We Skype quite a lot, and it always consists of the both of us looking through boxes and finding stuff for each other.  He told me about Don August, a former pitcher that he has met IP and has gotten a bunch of his autographs.

I went through the boxes that Mom had gotten me and found a ton of August's cards.  I was only going to send a few, but I saw that August will sign anything and everything you send him.  Not wanting to be greedy, I figured I would send some of the extras to a few of my friends who haven't fully embraced the TTM concept.

I was really happy to find the 1985 Topps Team USA cards of him, and the 1989 cards look really cool as well. 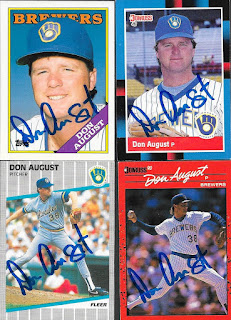 The top left card is a 1988 Topps traded.  Those always turn out nice due to the different kind of cardboard Topps was using for the Traded sets back then.  I was also happy to add signed versions from 1989 Fleer, 1988 Donruss and 1990 Donruss.

After talking to Max, he told me that August was super nice in person.  He sat and talked to Max for about half an hour at this year's Brewers Fest.  I learned the other day when I posted the TTM success on Instagram that August substitute taught my friend, Bryce, a bunch of times last year.  Bryce also said Mr. August is amazingly nice in person.

After hearing those "testimonials" from my buddies, I have a whole new respect for Mr. August.  It reminds me of the way Virgil Trucks used to be with fans.  I really wish there were more current and former players who would go this far out of their way for fans.  Seeing kids like Max and Bryce be able to sit down and have a conversation with a former MLBer is something that I think will keep kids interested in the game and ultimately the hobby!

Thank you so much for the amazing TTM success, Mr. August.  I'm not sure if you will see this post, but maybe it will find its way to you.  Also, thank you for being so good with the young fans of the game.