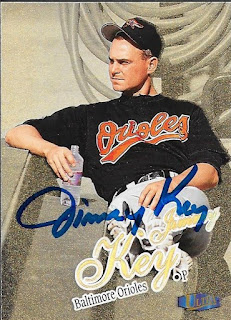 On Thursday (3/17) I got a TTM success from one of my favorite pitchers from when I was a teenager, former Oriole Jimmy Key.  Key signs one per, so I sent off the only Oriole card of him that I could find, this 1998 Fleer Ultra Gold Medallion.  The card looks great, and I think I did a good job with my choice.

Key (b. 1961) played in the majors from 1984 to 1998 for the Blue Jays, Yankees and Orioles.  I didn't realize, but he only played two seasons with the Orioles.  It felt like longer.  I remember that 1997 O's team he was on was really good, except for some bullpen blunders in the ALCS that year.  I had some other personal stuff going on that October, so I don't remember a lot from those playoffs.  I do remember them being a really good team, and the pitching rotation of Mussina, Erickson and Key could stack up against pretty much anyone.

I mailed to him on 3/7 and got my card back signed on 3/17 for a 10-day TAT.  He is someone that I likely will send to again after a while.  I love the signature, and the card looks great.
Posted by William Regenthal at 11:25 AM