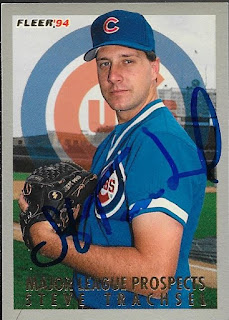 I got a TTM success last Saturday from former pitcher, Steve Trachsel.  I mailed to him on March 7 and got the three cards that I sent, signed, 12 days later.  I found a couple of his cards in one of the boxes that Mom gave me, and remembered Max telling me that Trachsel signed TTM.  This 1994 Fleer turned out really nice, and with it being his rookie card, was a nice one to send out. 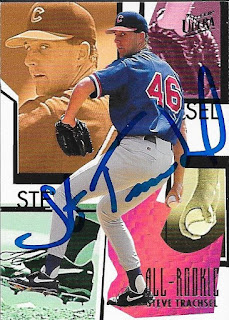 I really like how this 1995 Fleer Ultra turned out.  It looks really cool, and I am glad I included it.  I was torn between a few of the cards I had of him, but I'm happy I chose this to be sent. 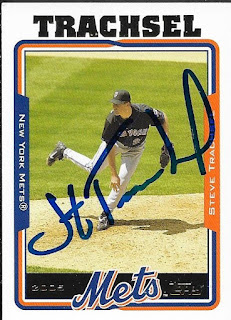 Finally, I got my first signed 2005 Topps.  I like how the blue sharpie blends with the color coordination on the card.  I have a couple more 2005s that I intend to send out, but this one looks great.  It might be tough to find one that looks better than this one.

On September 8, 1998, in the bottom of the 4th inning with two outs, Trachsel became the answer to a trivia question.  He gave up a home run to Mark McGwire that would break Roger Maris's single season home run record.
Posted by William Regenthal at 8:18 PM