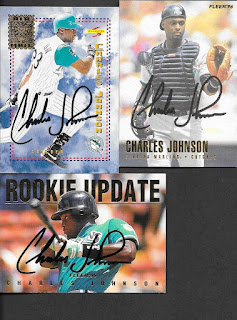 I got another TTM success on Friday, March 4 when these three cards came in from former Oriole Charles Johnson.  Part of the fun of doing all of these TTMs is finding cards of the guys I plan to send to, then deciding which ones make the cut.  I found around 10 of Johnson's cards and saw he was only doing around 3 autos per TTM, so I narrowed it down to the three that you see.  I feel like the horizontal Rookie Update from 1995 Fleer really turned out great.  I was really excited to finally find someone from the 1996 Fleer that I had who signs.  As you can see, that card turned out real sharp.  They made Fleer that year with a matte finish so that it would hold an auto better, and I feel like they did a good job.

I have an unopened box of 1996 Fleer still, and I may bust it to find even more stuff to send TTM.  We'll see if I go through with it.

Johnson's Oriole tenure began on December 1, 1998 when he was shipped from the Dodgers to the Mets with Roger Cedeno for Arnie Gooch and Todd Hundley, only to be then moved to Baltimore for the volatile Armando Benitez.  Johnson would be traded from Baltimore with Harold Baines to the White Sox during their 2000 playoff run for Miguel Felix, Juan Figueroa, Jason Lakman and Brook Fordyce.  Fordyce was the only player that Baltimore got in that deal who contributed to the major league team.

I mailed the cards to Johnson on February 22 and got them back on March 4, for an 11 day TAT.
Posted by William Regenthal at 8:41 PM