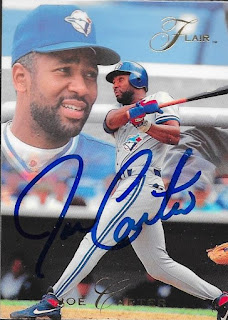 I got a TTM success on March 15 from 1993 World Series hero, Joe Carter.  I mailed three cards to Carter on March 4 with a check for $5.00 and got only one of them signed.  Carter returned the other two.  I'm not really upset, but it would have been nice if he had signed all three for that fee, but I get it.  Different players sign for different rates.

The signature looks great.  The cards I sent were a 1994 Score Season Highlights card showing his historic home run in the 1993 Series, a 1989 Topps and this 1993 Flair.  I imagine that Carter has seen a ton of the 94 Score, so he chose this one to sign instead.  It is definitely a good decision, because the card looks great.