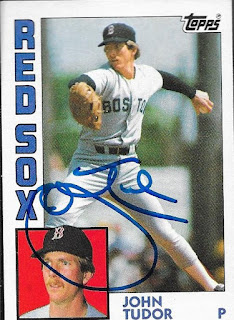 I got a huge TTM success on Friday (March 18) when I got 8 signed cards back from former pitcher, John Tudor.  I mailed to him on March 2, and got the cards back with a 16-day TAT.

The cards I got signed all contribute to my Topps autograph project, save for two.  I just thought they would look cool.

The above 1984 Topps has Tudor in a Red Sox uniform and is the 5th signed 1984 Topps that I have.  His signature looks really good on this card, I think. 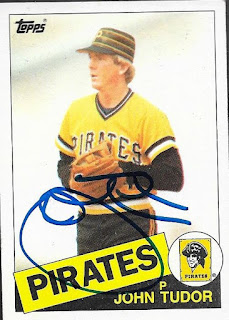 Here we have another old school Pirates uniform, this time on a 1985 Topps.  This might be my favorite of the bunch.  I am finding that 1985 Topps looks really good with a signature.  This is the 7th signed 1985 Topps that I have.  I'll have a tough time deciding which one will represent this set in my autograph project. 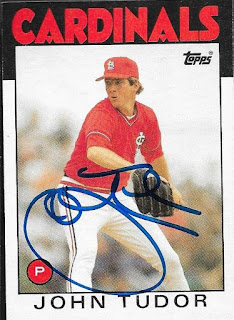 Of course, 1986 looks really good, too!  The signature that Tudor put on this one really pops. 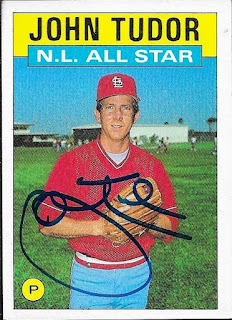 Here is another 1986, this time the All Star version.  This, and the one above it make five 1986 Topps that I have that are signed. 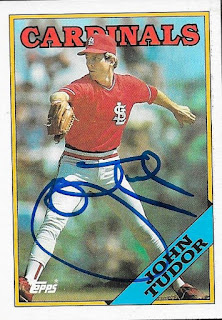 What I once thought was a boring design really comes to life when signed TTM in a blue sharpie.  This 1988 Topps really looks good, and surprisingly, is only my third out of a year of Topps that I thought I had coming out of my ears.  I think I might have to backtrack on my opinion of this set once I see some more TTMs come out of it.  This one looks really sharp. 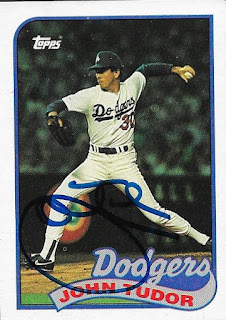 Again, I enjoy the 1989 Topps design.  This one didn't turn out as sharply as the others, merely because the backdrop is so dark.  It doesn't really take away from the card, but it kind of hides the signature. This is the fifth 1989 Topps that I have that is signed. 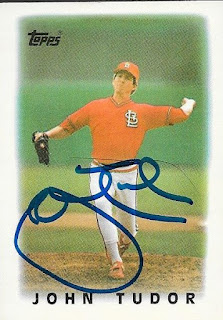 I included a couple other cards that I thought would look cool signed.  This 1986 Topps Mini turned out really nice.  I hope to get a few of the Topps Leaders cards signed in the coming TTM successes, but we shall see. 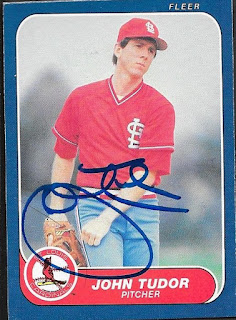 Finally, here is a 1986 Fleer that I sent off.  Over the course of my collecting career, both as a teen and now as an adult, I have not come across very many 1986 Fleer.  I don't really know why.  I like the solid blue design.  I think it is a really crisp, clean design, and turns out really nice when signed.