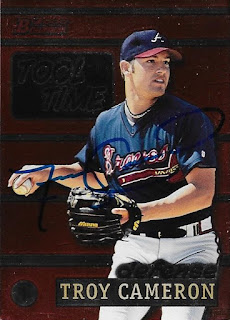 I got some more cards out of the old boxes I picked up from my LCS and sent them TTM, this time to former Braves prospect, Troy Cameron.  The above 2000 Bowman Tools of the Trade foil card looks awesome in person.  The scan really lets me down, but the red foil in person is really sharp. 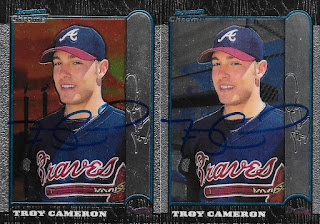 I also got two different 1999 Bowman Chromes signed.  The one on the left is the Home State (Florida) version of the card, which is a really cool feature in this set.  Folks from NC had the Cape Hatteras lighthouse in the background.  I need to find a few of those guys who will sign.

Cameron (b. 1978) was a first round (29th overall) pick by the Braves in the 1997 June Amateur Draft.  He spent 8 seasons in the affiliated minors (with the Atlanta, Colorado, Cleveland, White Sox and Padres organizations).  He also played in a handful of independent league games.  Between 1997 and 2005, in the minors, Cameron had 545 hits, 88 home runs and a .226 batting average.

I mailed to Cameron on September 22 and got the cards back on October 5, for a 13-day TAT.

Posted by William Regenthal at 6:25 PM