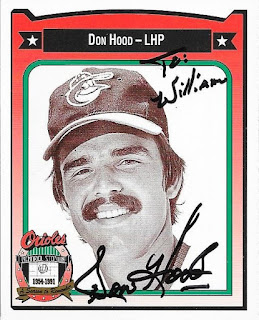 They say we each have a doppleganger.  Someone somewhere who looks just like us.  I've always been told mine was Brad Pitt (yeah, right).  Well, I found my friend, Jackson's, twin, and it is former pitcher, Don Hood.  Jackson looks a bit like Hood does, without the mustache, the most in the 1979 Topps card below.  I even sent a pic of the card to Jackson, and he screenshotted it.  I thought it was pretty funny.

Hood signed and personalized each card.  I had sent to him before, but those cards never came back.  I tried again with these, and here they are. Two of them (the 1974 and 1978) are Topps buyback cards.  They have the buyback stamp on them, so I thought it would be cool to get them signed.  I also got my 1991 Crown Orioles card signed.

Posted by William Regenthal at 11:21 AM