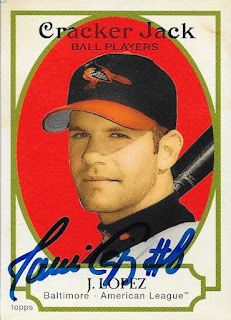 I recently took part in a private signing for former catcher, Javy Lopez.  I had one specific card in mind, but couldn't find it.  I gave up the search when I found the above 2005 Topps Cracker Jack, and the below 1997 Pinnacle Zenith.  I ended up finding the card I had been looking for, after this signing took place.  Lucky for me, there was another one not too long after, so I got what I wanted done (and I will show off the other card in a later post). 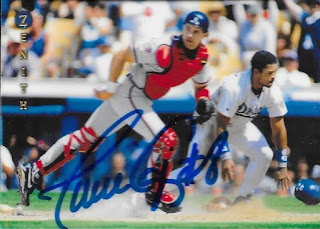 Man, I really love 1997 Zenith.  I actually think I have the set in a box I had gotten from the LCS, so I may try to get a few more of these signed.  I have one from the set out for a private signing right now, and I'm hoping it comes back after the holidays.  If it does, it will be a huge get.

Lopez appeared on the 2012 Hall of Fame ballot, but received only 0.2% of the vote.  Lopez was hailed as a huge free agent signing for the Orioles back in 2004.  He his .316 his first season in Baltimore, but only managed 23 homers, when he had hit 43 the prior season for the Braves.  His production fell off quickly, and he was traded to the Red Sox in 2006 for a PTBNL (the player turned out to be Adam Stern, who appeared in 2 games for the Orioles in 2007).  I remember a brief experiment where the Orioles tried Lopez at first base, which failed miserably.  I also think that the experiment was performed without Lopez fully buying into the idea.

Posted by William Regenthal at 11:14 PM